A one-on-one with one of my favorite Veterans.

Attention, Friday! It’s the end of the week, if that doesn’t brighten your tropically soaked day, I’m not sure what to tell ya.

On the national level, today is the day we honor those that have fought and served our country. That’s right, it’s Veteran’s Day!

Although we all have felt the impact from veterans, i.e. freedom, not everyone has a close friend/ family to honor today. So join me in honoring and learning more about the experience of service from one of my personal heroes, my cousin, Rachel.

Why did you join?

I really wanted to do something, be part of something much bigger and much more important than just myself. I knew that my family would not have been able to pay for me to go to college, and I honestly had no clue what I wanted to “be when I grew up.” Most 18-year-olds don’t. I didn’t want to just go to some random university to party and get into unnecessary trouble (I can do that on my own). My parents were both against me joining at first, but they heard me out and decided I was right.

Naval Hospital Corpsman. Just to clarify, that is the most highly trained medic in any branch of service, with the widest scope of practice to provide the best, most integral patient care. In the field and on deployment, we had a nurse and a physician that we saw occasionally just to check in. We were incredibly independent and highly skilled in our patient care. 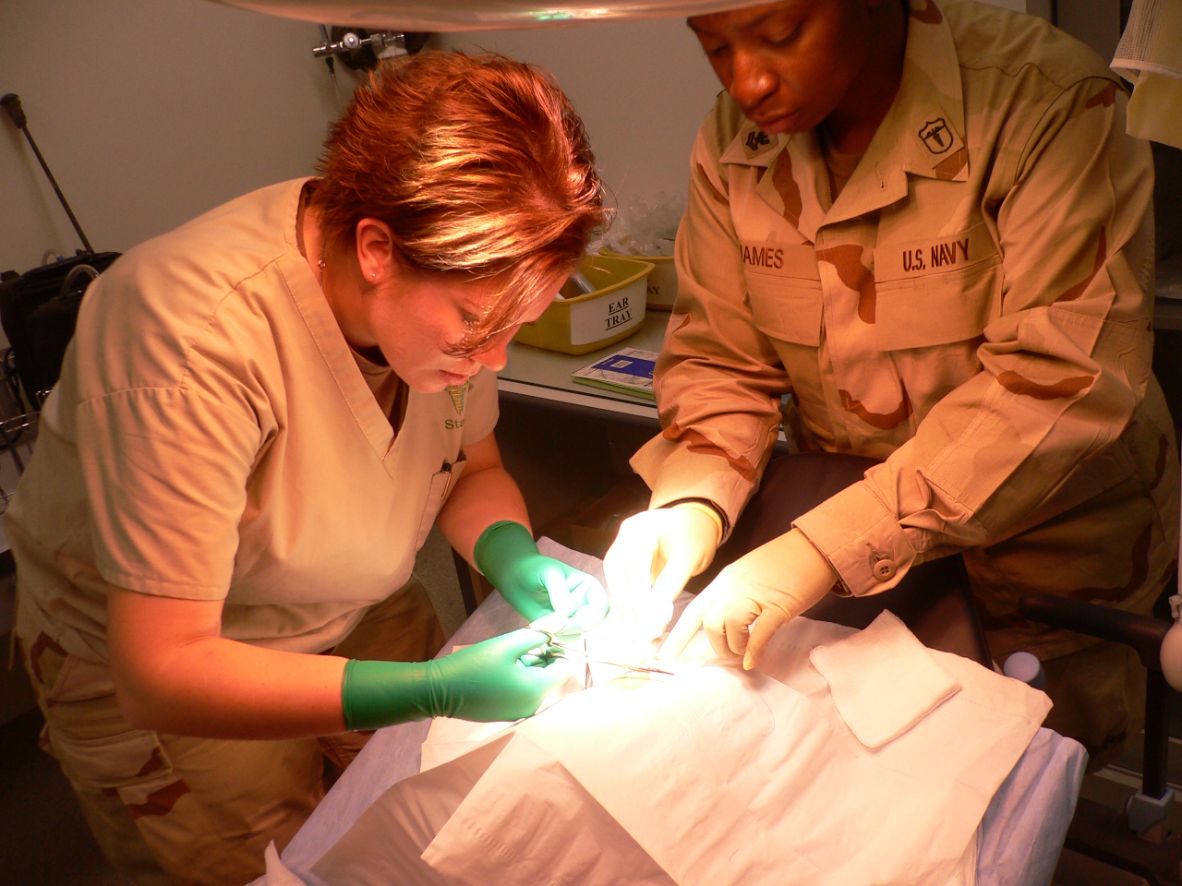 “This was at Camp Ajafjan, I was serving with Captain Jackson (not in this photo) who had been in the Navy a long time, like even had been stationed at the White House. Since I respected this woman so much, when she asked if I could suture this kid’s forehead — who had walked into a street sign— I just  said, I got this, even though it was my first time and just sewed up this kid’s forehead. Proud to say, he hardly had any scar.”

Why did you pick the service branch you joined?

Do you recall your first days in service?

First days at boot camp: Who doesn’t recall that? Starting from the moment you get off the bus in a place you’ve never been, with no one you know and zero idea what to expect, it’s completely disconcerting to have an authority figure screaming at you for no reason. It’s orchestrated chaos meant to confuse and mentally disarm you. They gave us literally 30 seconds to call home and at least tell them we were alive. 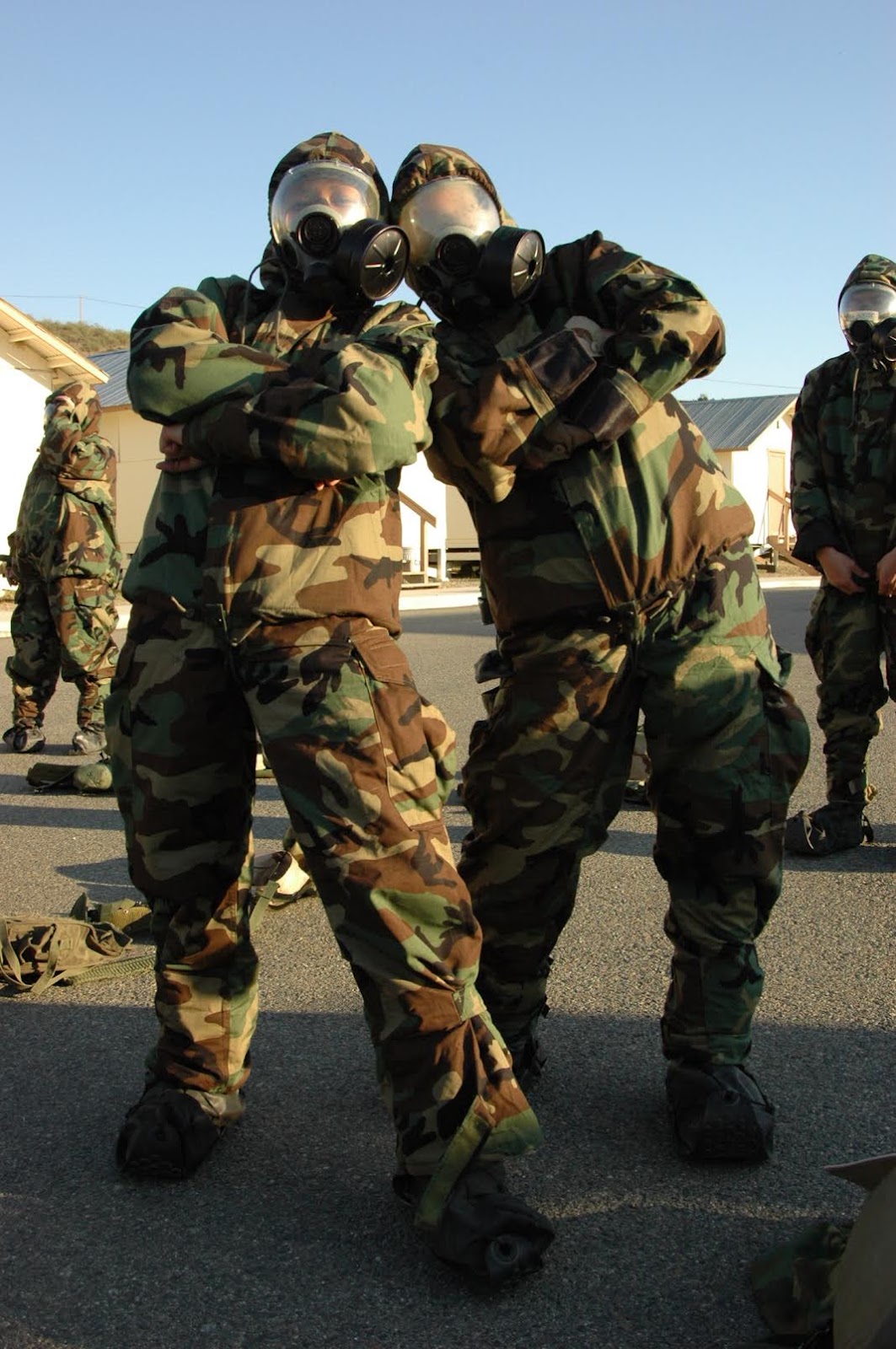 Rachel, on the right in her MOP suit.

I sometimes struggled with claustrophobia in a gas mask even though I’m not claustrophobic, like, I can fall asleep in MRI machines, but with that mask, especially if you don’t get a good seal and it starts to fog up, it was a different experience. On my first deployment, I had to have it with me 24/7. In bootcamp you learn just how important it is, they send you through a gas chamber with highly concentrated tear-gas. They lined us up in rows and the whole cinder block room just started filling up with gas. They go down each row and once they get to you, you have to remove your mask to say your last name, your social security number and your unit number. Not one person could do it. Vomit everywhere, but not on the ground, we were told to bail in our shirts if we had to. I came out of that room looking like a rodeo bull, but I didn’t puke. It gets into your pores though, so when you shower it’s like round two in a much milder form. You do learn you can survive though and learn that your mask really works.

How did you get through it?

Sometimes by the grace of God. I learned very quickly that if you just do the things they say, when and how the orders are given, you’ll be fine. The longer you can go without your drill instructors even knowing your name, the better.

Which war(s) did you serve in/ where did you go? 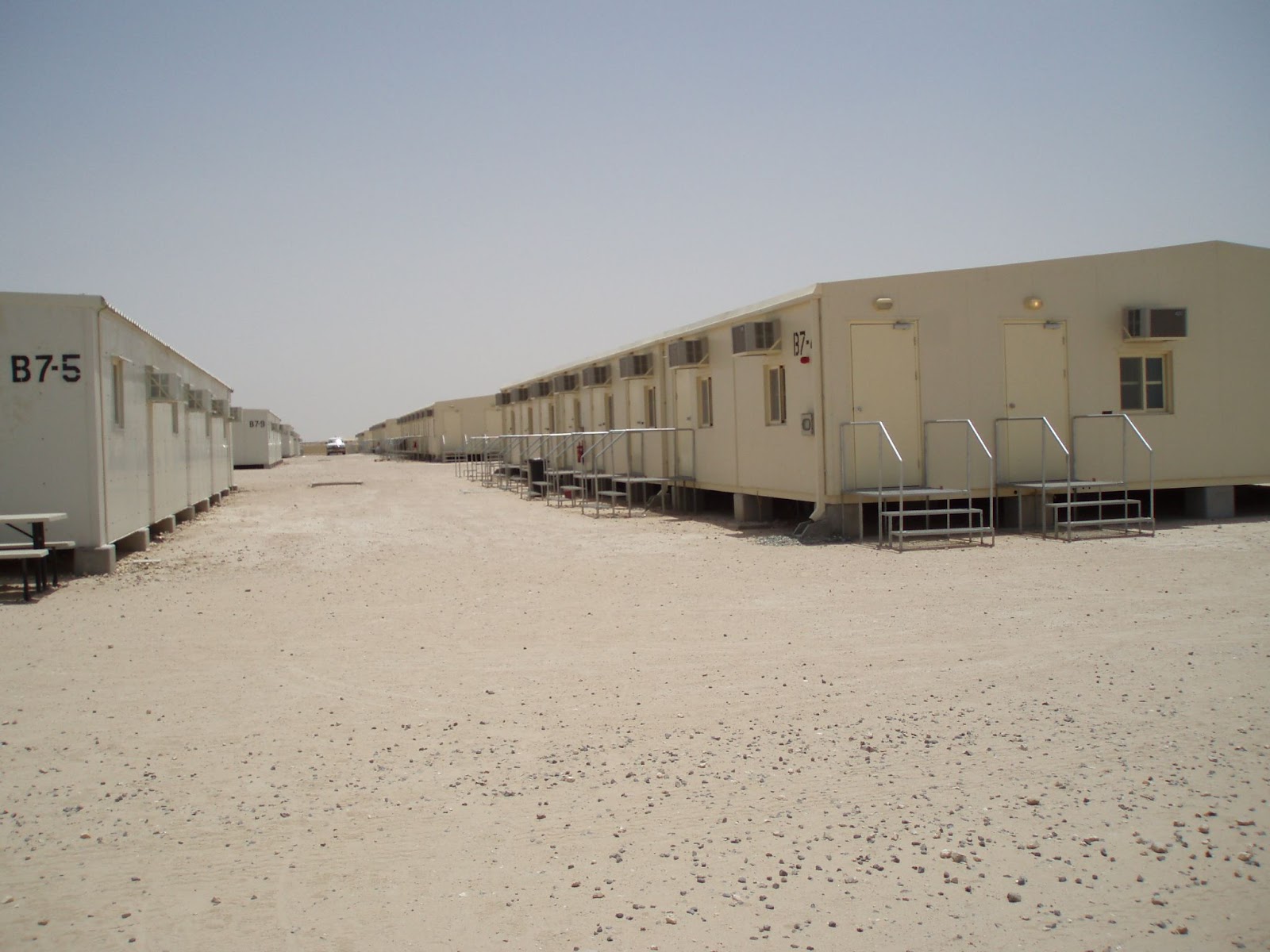 “They fit as many bunks in as humanly possible, each bunk was three beds high with a total six bunks in each barrack and you had to walk quite a ways to find a bathroom but hey, the ship was worse. Oh, and dinner-plate sized spiders, that’s a thing. Camel Spiders. I was walking to take a shower one night and the light was shining towards me.  I saw this thing coming out of the rocks and I decided it was better just to be dirty, seriously, platter sized creature—no thank you.”

Do you remember arriving and what it was like?

That’s something you never forget. As soon as you get off the plane you are bombarded with a wave of heat that I could only compare to sticking your head in a hot oven. 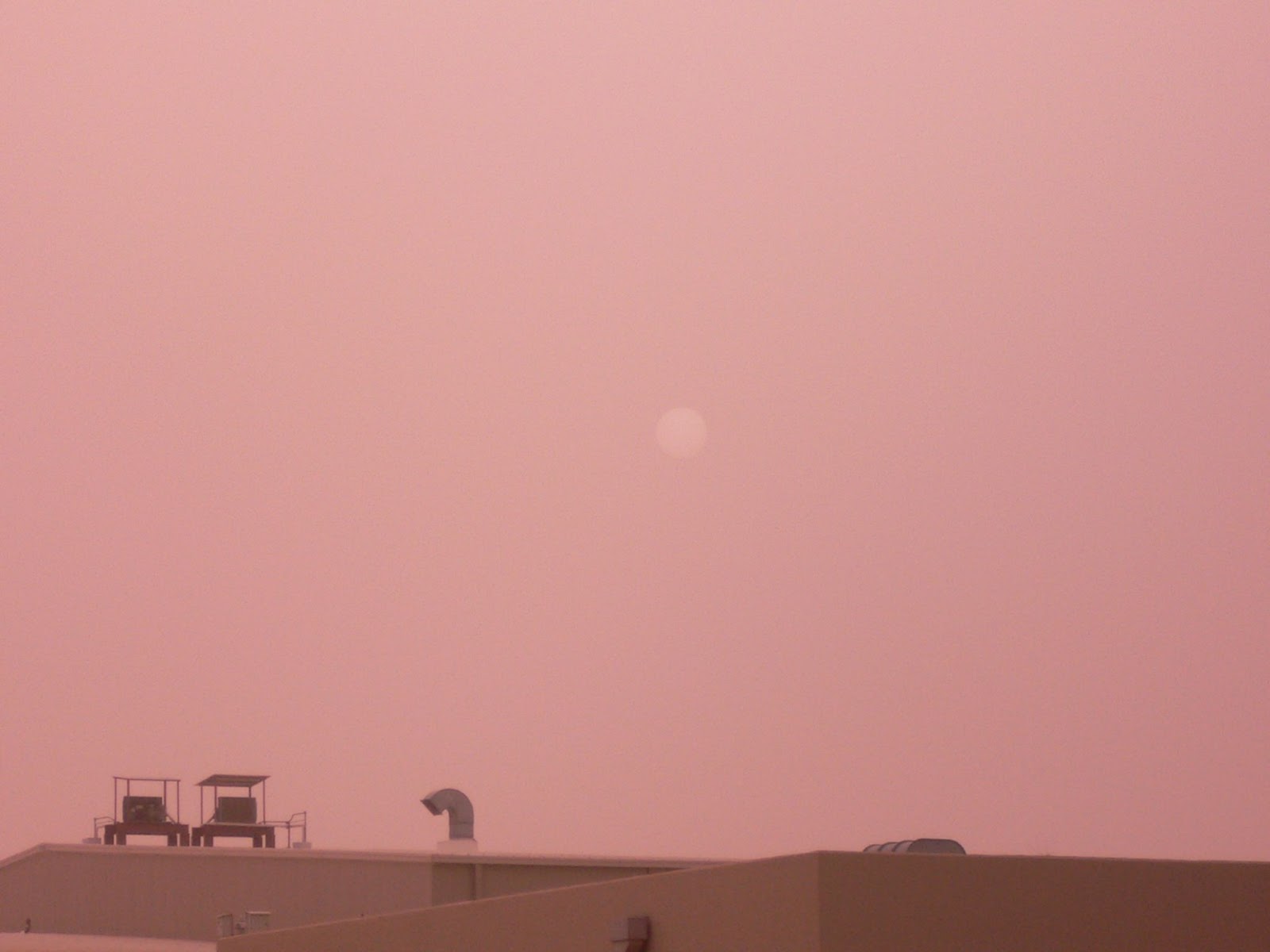 High noon right before a sand storm at Camp Arafjan

“Daytime and nighttime had a big swing, like actually 115 to 120 degrees in the daytime and surprisingly cold at night. One of our jobs as medics was to check the temperature every couple of hours to deem whether it was appropriate for servicemen to be active.”

The “bright lights” and “big city” of Buehring.

How did you stay in touch with your family?

Mainly email, some postal mail and occasional phone calls when available. Receiving a care package from home was such a great feeling! The random things we have available to us here we tend to take for granted. On deployment, where you can’t just go get anything you want like when you’re stateside, it’s amazing to get a little bit of “home”. For example, my sweet grandmother sent me a batch of her special Christmas sugar cookies. By the time I got them they were basically just crumbs, but I still ate every speck feeling so loved.

When there was the option of eating in a real dining hall, the food was actually pretty good. In Kuwait in particular, the food was cooked by contracted locals, so a lot of the options were things that I’d never seen before. I can say that at Camp Arafjan, the fancy base that actually had a building for a chow hall not just a tent, had the best apple juice I’ve ever had. When we would get shawarma (totally different than what you get in the States) outside of Arafjan from the locals, we would ask what kind of meat they were carving and they would just say “meat,” so I have probably tried even more than I want to be aware of.

Did you feel pressure or stress?

Seriously?! We worked 12 hours on and 12 hours off, seven days a week. And then obviously if something happened then we all got involved.

How did people entertain themselves?

Probably a lot of things you don’t want to hear about, but one night we convinced this kid to see if we could get a 16 gauge needle to start his IV. Not your typical humor with medics, perhaps, but you gotta stay sane somehow, you know? Gallows humor was just how we got through it.

They do try really hard to provide some ways to be entertained to keep up morale so I did get to see the Dallas cheerleaders and Lee Greenwood sing God bless America. But I wasn’t on medic duty those nights. 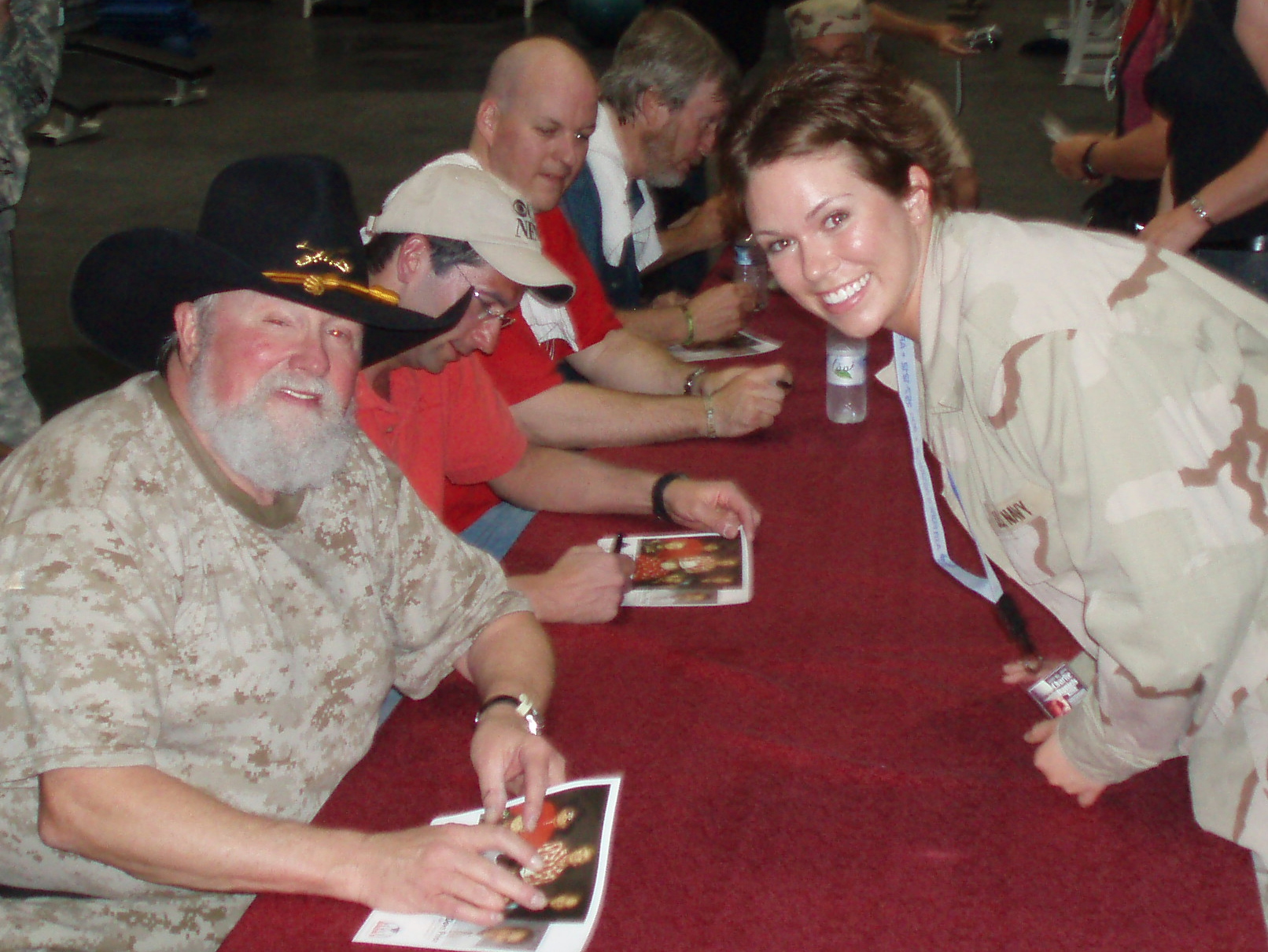 “On one USO tour concert, myself and three other guys did the medical standby for a Charlie Daniels concert. That’s me and the man himself!”

Do you recall any particularly personally significant moments?

I wore a St. Michael (Patron saint of the military) pendant that was given to me by some of the nurses I worked with at CP. I buried it in the sand on the day I left.

Did you make any close friendships while in the service?

Hopefully, that gave you a flavor for the kind of incredible, self-sacrificing, determined and brave person that is my cousin Rachel.

I am incredibly grateful to each and every one of those that have made honorable and ethical decisions while serving our country both at home and abroad.

Thank you for your service, Veterans!